Carolina Reaper is the current Guinness World Record Holder for the hottest chilli in the world. It is a notoriously difficult chilli to grow.

Carolina Reaper is currently the Guinness World Record Holder for the hottest chilli in the world. It is a notoriously difficult chilli to grow, often producing very low yields.

Being the Guinness World Record Holder this variety is in great demand, and sadly several, less than pure, strains have appeared on the market.

Over the years we have grown Carolina Reaper from several suppliers and been very unimpressed with the plants; poor germination, poor vitality, and ultimately low fruit numbers.  This  winter, however, we were able to obtain seed from a reputable UK wholesaler that we have dealt with for over 30 years. The plants we have grown from this seed, and are now selling, look suburb… BUT we have no idea how well they will perform with fruit production.

Heat level: World’s Hottest Chilli
According to the Guinness World Records in 2017 Carolina Reaper was measured to have an average heat level of 1,641,183 Scoville Heat Units (SHU), according to tests conducted by Winthrop University in South Carolina, USA. See https://www.guinnessworldrecords.com/world-records/hottest-chili

Status of plants being sold
Currently the plants we are selling are well grown, with large healthy leaves and growing vigorous. They have flower buds but no fruit on them. 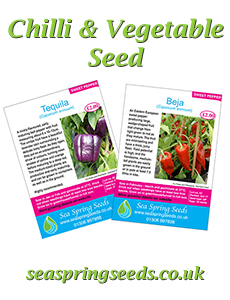